There are some basic differences between Roman Catholic Easter and Orthodox Easter, one of which is that we don’t always celebrate the same date. There are years when the dates coincide, and there are years when they are celebrated a week apart. Or even five weeks apart, like this year! Hence the fact  that Catholics (and Protestants of course ) celebrated Easter on the 31st of March , whereas we Orthodox Christians  are obliged to wait till the 5th of May – fair enough considering that hopefully the weather will be perfect!  In the meantime, we’re in a 40-day period during which we fast.  The fasting period began on the 18th of March (”Katharí  Deftera” our Mardí Gras) and  will end the midnight before Easter Sunday.  Fasting the Orthodox way means no meat, no fish, no dairy, no eggs.  That leaves us with a bunch of vegetables, legumes, fruit and some sea food to eat… But what about pastry? How do we cope with our need, our desire for something sweet, for a dessert? In today’s post we’ve got a typical example of a Greek dessert, totally suitable for the fasting period. It’s called ”halvás” and it’s sort of a semolina and olive oil pudding. 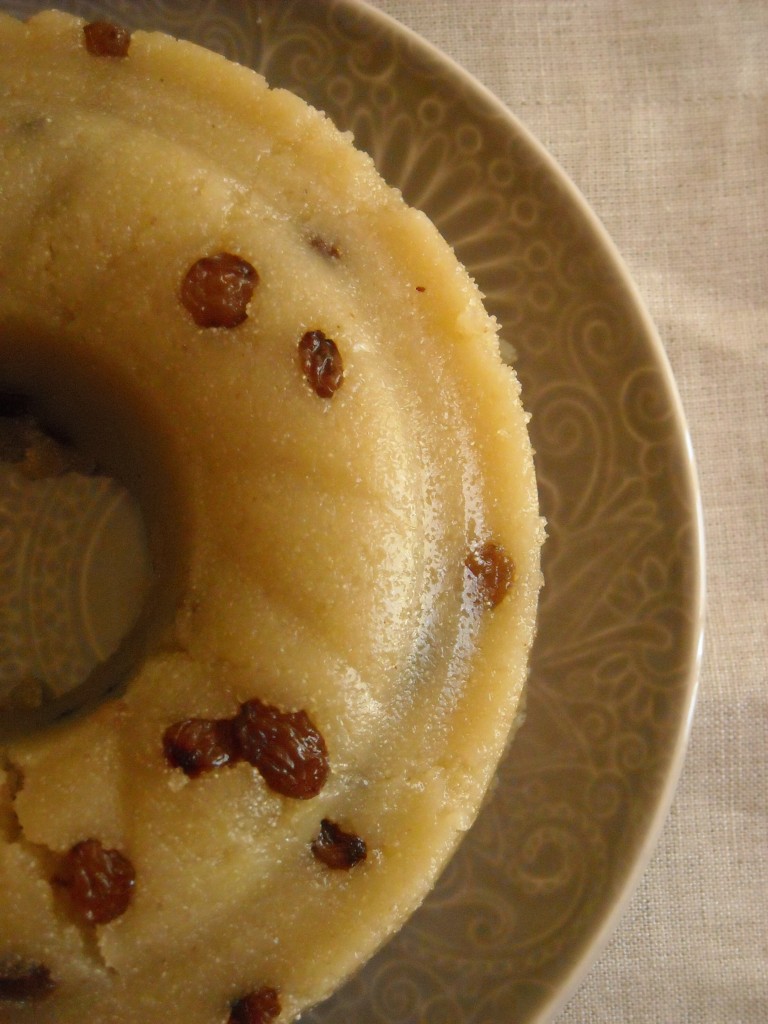 Prepare the syrup: Add the water and sugar in a medium saucepan.  Boil for 5 minutes then lower the heat and simmer gently for a couple of minutes. Remove the saucepan from the cooker and let the syrup cool.

In a large saucepan and over medium to high heat, add the oil and heat it well.  Add the coarse semolina stirring frequently in order to prevent sticking. Cook the semolina until its grains begin to toast and turn to a deep golden color.

Add the syrup to the semolina mixture. The semolina is going to bubble and spatter so be very careful not to burn yourself. Don’t forget to keep on stirring. The mixture will be ready when it thickens and the semolina has absorbed all the syrup. Add the walnuts and the raisins, give it a last stir then spoon the mixture in a pudding mold. Press it on the top. Let it cool well before serving. When served, sprinkle with some cinnamon.

Tip: Instead of walnut you can always use any other kind of nut such as almond or pine nut. Keep in mind that this dessert is a knockout when covered with melted dark chocolate!